On a beautifully sunny day, 19 members visited Isurium Brigantum, or Aldborough as it is now known, near Boroughbridge, to learn about the town which had been the main trading and administrative centre in the North of England in Roman times, termed a “Civitas”. It had been far more important than Eboracum (York) and the walled town had held about 3000 people in those times. The current village which overlies part of the Roman town has a population of only 300. Much of the Roman structure is hidden below houses, gardens and fields, so villagers are not allowed to dig more than 2 spade-depths in their gardens without having an archaeologist present. The Roman town extended beyond today’s village boundaries and many of the surrounding fields have intriguing mounds and banks in them which have been elucidated by geophysical studies or by excavations (now turf-covered again). English Heritage manages a small area where sections of town wall, interval towers, floor mosaics and a Roman quarry are visible. Two mosaics have been left revealed in situ and are protected by individual permanent buildings put up in the 19thcentury.

There is also a small museum with many Roman artefacts. Friends of Roman Aldborough showed us around the EH site and museum and also let us handle a selection of Roman pottery – there was some particularly fine Samian ware.

Lunch at the Ship Inn was followed by a walk around the village greens imagining Roman terraces and viewing the village stocks. We finished with a visit to the church, built in the middle of the Roman Forum site and having many of the millstone grit blocks from the Forum buildings in its walls. The church was the third on that site, the earliest part being 14thcentury, but Roman stones were recycled in each rebuild. A statue of the god Mercury, originally from a Roman temple, had been rescued from the churchyard and re-sited in the church. We admired stained glass windows of many different vintages and were fascinated by the longest pendulum of any church clock in the UK, which extended from the clock in the tower to a pit below ground level – 30 feet long in all and keeping good time. 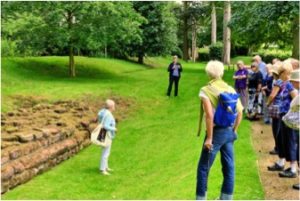 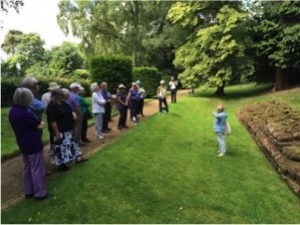 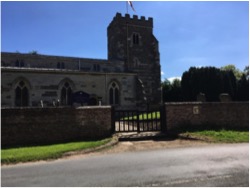 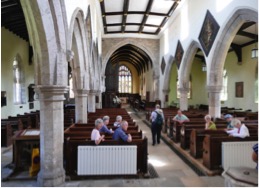 It was a fascinating and informative visit which may well inspire members to return at their leisure with family and friends. The EH site is open at weekends through the summer months, closing at the end of September.